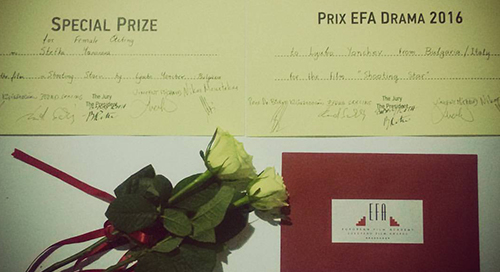 In September at the International Short Film Festival in Drama (Greece), “Shooting star” won the most important award of the festival “PRIX EFA Drama”, with other words “Official nomination for the 29th Awards of the European Film Academy” in the category “Best European Short Film 2016”.

There are few statements that some of the professionals said about the film:

„A triumph of all things cinematic: writing, acting, cinematography and editing. At the center of the film was the performance by Stefka Yanorova a mother angry and yet filled with love. The entire cast was brilliant even the exhusband’s voice on the phone run true. It was honest and interesting and always surprising because the film has emotional depth and relevance to us all. It was cinema in its purest form.“

„Love is one of the major themes of this year selection. Love is present in all its form – filial, maternal. In the Bulgarian “Shooting star”, one of the best shorts in the competition (ISFF Drama), a mother is ready to go to jail for a car incident with casualty, caused by her son.“